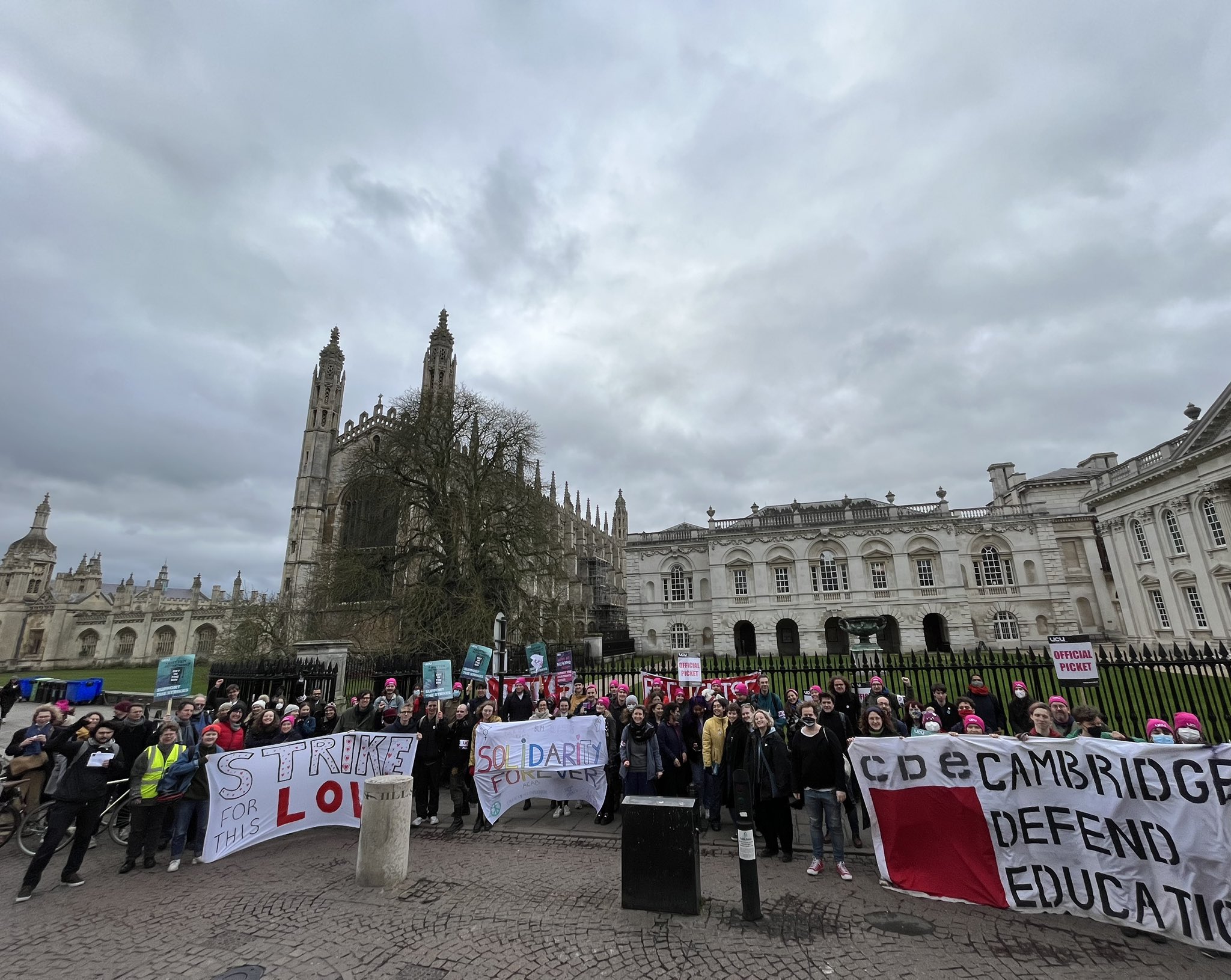 We kicked off our first day of strike action with lively pickets at Sidgwick Site, Downing, Senate House and Education, followed by a march to rally outside Great St Mary’s Church, where strikers and supporters were addressed by CUCU Pensions Officer Daniel Weiss and SU Graduate President Anjum Nahar, whose powerful speech in solidarity is reproduced below.

“Since the very beginning of industrial action in 2018, Cambridge students have stood in solidarity with the staff who have been striking here. We’ve stood with you on the pickets, brought you tea and coffee, and have even occupied buildings to get management to pay attention.

Four years and a pandemic later, the pensions dispute hasn’t gone away even though many of the students who were here at the beginning have graduated.

Management were banking on the fact that when those first students left, they would take their knowledge and support with them too. But, as the student community, we’ve continued to educate ourselves, talk to our lecturers and supervisors and build robust campaign groups.

Those against the strikes often make the quite valid point that reduced contact hours have a negative impact on student mental health. The root causes of both the staff and student mental health crises are the same; high workloads and financial hardship. But it’s the University thats dithering and delaying when it comes to these issues, while staff work tirelessly, day and night to provide pastoral care to students.

Tory MPs insist on using divide-and-rule tactics. They tell students to demonstrate their discontent and petition for refunds, without acknowledging that it was their policies which increased tuition fees in the first place.

University management have also tried to drive a wedge between staff and students. And in some Universities, the management is winning. Student Unions at UCL, Leeds and elsewhere have recently turned against the strikes. But not at Cambridge.

As the students of this University, we support the strikes because the subpar working conditions of staff are impacting our learning conditions.

We support the strikes because many of us want academic careers, and don’t want to be in the same precarious position that our lecturers and supervisors are in today.

We support the strikes because we oppose the marketisation of our Universities which has tried to turn us into consumers, especially members of the international student community, who often pay triple tuition fees only to be surveilled and restricted once at University.

We support the strikes because the current system is broken. Those at the top earn hundreds of thousands while many early career academics and academic related staff can’t afford to pay rent.

We support the strikes because we ARE UCU members. PhD students who supervise are directly affected by the issues that the UCU campaigns on.

Many staff members were students once and many students will become staff. Management would like us to forget this fact, but we won’t. Students have consistently stood in solidarity with the UCU and will continue to do so until the fight for fair pensions has been won.