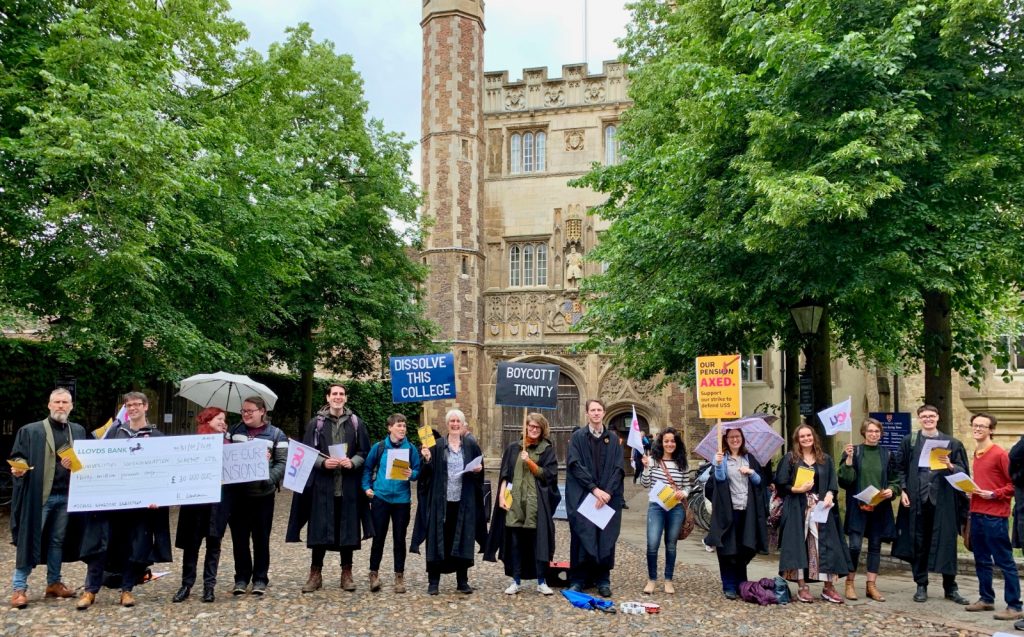 Trinity College has paid £30 million to buy the College out of the USS pension scheme. In public, it has presented this decision as a means of averting the remote risk that, under the “last employer standing” (LES) principle on which the USS scheme operates, the scheme might —  were almost all other employers in the USS scheme to fail — call on Trinity’s endowment to fund pension obligations of other employers.

The determination of what is in the College’s best interests therefore involves weighing the claimed financial risk of remaining in USS against the (very significant) reputational and educational costs of withdrawing — some of which seem not to have been appreciated fully. This post, however, focuses on the financial considerations, because of their centrality to Trinity’s public case.

CHARACTERIZATION OF THE RISK POSED BY USS TO TRINITY’S ENDOWMENT

If the whole of Trinity’s endowment (which provides the vast majority of the College’s income) was seized to fund the collective pensions obligations of USS, the impact on Trinity would indeed be potentially existential. But the College faces multiple existential risks, from political uncertainty to climate change, so what matters for a prudent policy is not only the existence of such a risk but its likelihood of eventuating. No probability has been assigned to the doomsday scenario in which Trinity’s assets are called in to fund USS pensions. Moreover, some discussions of the case for exit seem to conflate the small but realistic prospect of the USS scheme facing funding challenges with the much more remote possibility of these challenges coinciding with (or causing) a sector-wide financial collapse.

It is therefore important to be clear about the nature of the risk under discussion. Were the USS deficit to increase and further funding to be required to cover accrued benefits, Trinity would — like all other USS employers —  contribute additional funds in proportion to its (very small) number of USS employees, not in proportion to its wealth. Such additional contributions would be trivial for an institution of Trinity’s resources.

This would remain the case even if a number of USS employers became insolvent. Both the USS Trustee and the Pensions Regulator have an overriding interest in designing deficit recovery plans which do not pose an existential threat to USS employers, since the long run solvency of those employers is the precondition of a line of funding to address such a deficit. USS liabilities would therefore threaten the survival of a significant number of USS employers only if there were no alternative to winding up the scheme, and this would only happen in the context of a sector-wide collapse.

The only case in which Trinity would be called on to cover a significant portion of a funding shortfall, and thus have its endowment threatened, is if almost all other pre-1992 higher education institutions had become insolvent: a doomsday scenario for the UK Higher Education sector (including the University of Cambridge and all the other Cambridge colleges) in which Trinity would be unlikely to be able to operate as normal in any event.

Advice provided to the Council by Xafinity/XPS pension consultancy, some of which is now in the public domain, stresses throughout the remoteness of the existential risk to the College’s endowment. In the words of the leaked document, “the adverse outcome under which the debt is enforced is very unlikely and we do not expect it to happen at any time” (p. 12). However, the advice also, in places, blurs the relationship between some deterioration in the sector and scheme (which would have a trivial impact on Trinity), and the sort of “doomsday” scenario against which withdrawal is said to provide a guarantee. This has the effect of making the risk seem much less remote than it in fact is.

The Xafinity/XPS advice considers the main threat to the solvency of the higher education sector to be the USS scheme itself, rather than any external pressures like cuts to funding, or Brexit. In particular, it envisages

The Xafinity/XPS analysis attempts, using proxy scheme data, to project USS’s “self-sufficiency position” (i.e. the position at which the scheme expects to be able to sustain itself by investing assets on a low-risk basis, so as to be near-certain of never requiring additional support from employers) over the next 10 years, in order to obtain an understanding of the likely variability of the overall deficit. As the advice itself notes, this shows that the self-sufficiency position “is expected to improve from 71% funded to 84% funded (after 10 years) and 100% funded (after 20 years)” (p. 9).

However, the advice emphasises the “very wide range of possible outcomes”. In a large majority of these, USS would be more than 100% funded on a self-sufficiency basis in twenty years’ time. But the document focuses on the adverse outcomes, in particular the “1 in 40 adverse outcome after 10 years”: 30% funding on a self-sufficiency basis, with a corresponding deficit of £54bn (p. 10).

Since this is one of very few probability figures provided in the document, it is easy to read this as the risk that Trinity has to worry about. But this is not the case. Even were such a funding crisis to develop, USS would go to great lengths to develop contribution and benefit reforms which would enable scheme employers to remain in operation and address the deficit through ongoing contributions. The very fact that the sector’s assets could not cover such a deficit gives USS every possible motive not to resort to the appropriation of assets in a way which would threaten employers’ survival. That it is to say, the “1 in 40” outcome is not the same as a situation in which the trustee would call in the “S75 debt” (i.e. the shortfall in the overall scheme) against Trinity’s endowment.

Further, even were a situation to arise in which the funding streams available across remaining employers were insufficient to meet contribution requirements, this would not lead automatically to strict application of the full “S75 debt”. Although the Xafinity/XPS analysis outlines a hypothetical sequence of events in which other measures to correct course and put the scheme on a better footing fail, it explicitly concedes that such a sequence of events would “require a very unlikely event (failure of the scheme) followed by an unlikely event (strict application of the full s75 debt on an LMS (i.e. LES) basis)” (p. 11).

Even were USS to fail, Xafinity/XPS identifies other courses of events as more likely. In particular, USS could enforce only a reduced debt (to return the scheme to a healthier, but not fully insured funding position, without destroying its own supporting employers), or the government might intervene to bail out the sector. There are also other potential scenarios, such as the scheme entering the Pensions Protection Fund. Again, as Xafinity/XPS concede, “the adverse outcome under which the debt is enforced [i.e. Trinity’s entire endowment is threatened] is very unlikely and we do not expect it to happen at any time” (p. 12).

RISK AND THE BEST INTERESTS OF THE COLLEGE

Reading the Xafinity/XPS advice closely makes clear that an existential risk to Trinity’s endowment could materialise only from a concatenation of multiple improbable developments. In effect, both the USS Trustee and the Pensions Regulator would have to have failed catastrophically to anticipate downside risks (hard to imagine, given findings by the Joint Expert Panel that these bodies had been overly pessimistic in their approach to USS funding); those worst-case, low-probability risks would have to materialise; and USS would have to choose to enforce the full S75 debt despite the catastrophic consequences for the scheme’s long-term funding, as well as for the entire UK Higher Education sector.

A fuller understanding of the circumstances in which the risk is said to materialize explains the repeated references to its remoteness. With a full grasp of this remoteness, on financial grounds alone, it is not obvious at all that it makes sense to pay £30m to avoid the alleged threat to the endowment. An internal Council paper, also in the public domain, concedes that the judgment is finely balanced: “There is of course no ‘right’ answer, as the hope and expectation is that USS will not get into difficulties” (p. 7). Given the certain non-financial costs of withdrawal with respect to the College’s reputation and educational mission, there must therefore be grave doubts that withdrawal can plausibly be in the best interests of the institution.